What Are the Real-World Applications of Pattern Recognition?

What if you could predict a market crash or a stock price fall? How about detecting an earthquake before it happens? What potential does AI have for diagnosing serious health conditions like cancer? Pattern recognition – finding hidden patterns in data – is one way to effectively solve problems and automate tasks across a variety of industries. This article will cover what pattern recognition is, how it’s used, and the real-world opportunities it opens up.

What is pattern recognition in computer science?

Pattern recognition is the ability to identify a pattern or a regularity in a set of elements. In computer science, pattern recognition is an artificial intelligence technique concerned with the development of methods to detect and classify regularities in data such as images, sounds, or texts. Patterns can be discovered based on statistical analysis and historical data.

The pattern recognition method is characterized by the following features:

Pattern recognition can be divided into three main categories:

It is a method in which a computer algorithm is trained by a human to recognize patterns based on a predefined set of labeled data and then classify new data.

In this case, the model learns without direct guidance. The algorithm finds correlations between different data elements (inputs) based on their similarity.

In reinforcement learning, the agent finds a solution to the problem by trial and error. The AI is provided with an environment and learns how to work in that environment to reap the biggest rewards. 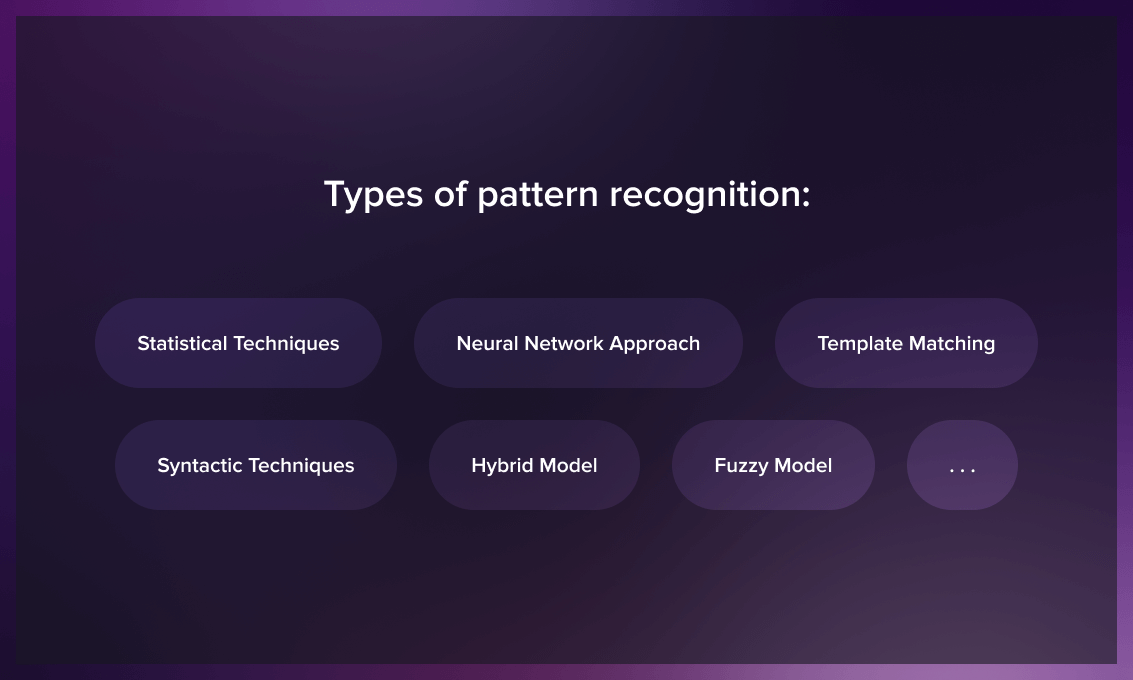 There are several types that are used depending on the data available.

Three of the most popular are explained below, while a more detailed overview of the rest can be found in this post.

Discovery of patterns in the data: the process

A pattern recognition system can be trained to detect any kind of regularities in textual, auditory, or visual information.

The output of the pattern recognition process will be one of the following: 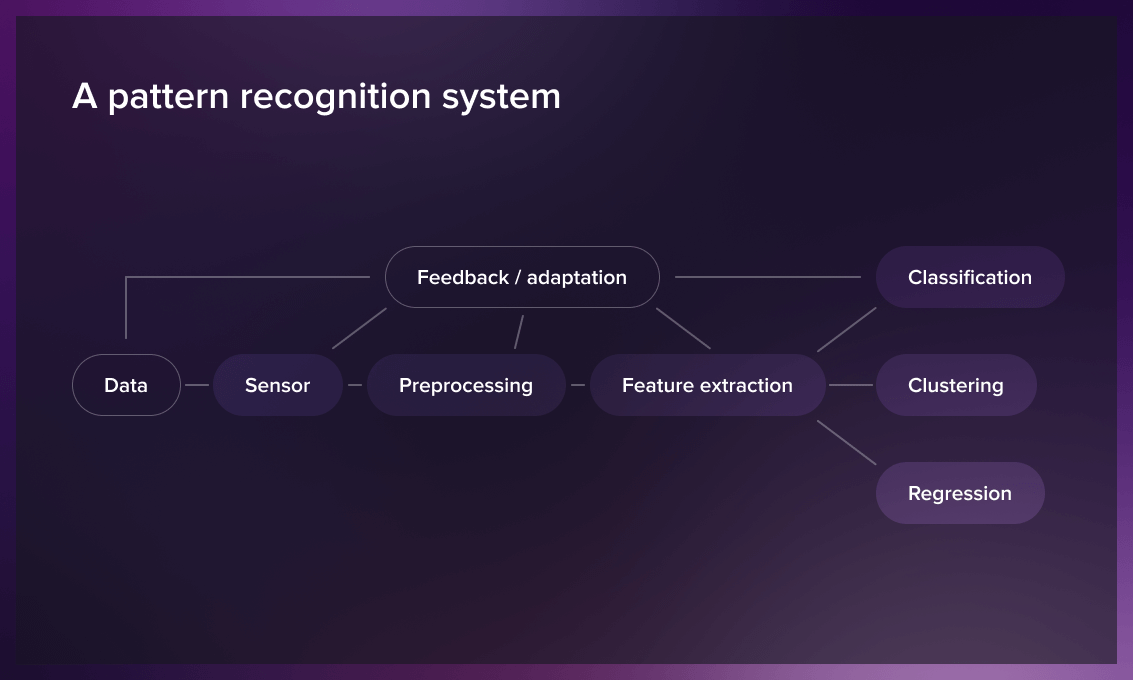 Is pattern recognition the same as machine learning?

Originally, data matching for pattern recognition was done via statistical analysis, programmed instructions, and eventually the introduction of systems that can learn from data themselves, i.e., AI technology. Machine learning and neural networks are thus advanced methods for finding patterns and regularities. However, the term “pattern recognition” is still commonly used outside of academia.

Below we have compiled some representative examples that demonstrate the efficiency of pattern recognition applications in various industries. Similar techniques can be implemented in any business to facilitate processing and dismiss routine operations.

One significant example is recent research led by MIT’s Department of Electrical Engineering and Computer Science. Since Covid-19 has been known to cause more harm to older patients, scientists have suggested that this is due not only to the general aging of the immune system but also to age-related lung changes. In the elderly, lung tissue shows different gene expression patterns than in young people.

The scientists then narrowed the list of potential drugs by focusing on key genetic pathways. They mapped the interactions of proteins involved in aging and infection with SARS-CoV-2. They then detected areas where the two maps intersect. These efforts have identified the gene expression network a drug needs to target to fight Covid-19 in elderly patients.

The same pattern recognition techniques are applicable for detecting and forecasting cancer. For example, clinical decision support systems (CDSS) diagnose a patient’s health status based on their symptoms and demographics, while computer-aided detection systems (CAD) help clinicians identify tumors in medical images. Breast cancer, lung cancer, and colon polyp detection are some of the most effective CAD applications.

Pattern recognition also has security applications. For example, it can be used to detect suspected religious radicals, criminals, or civil unrest via social media. A huge amount of data is generated on social networks every minute. AI can help turn this data into actionable information. 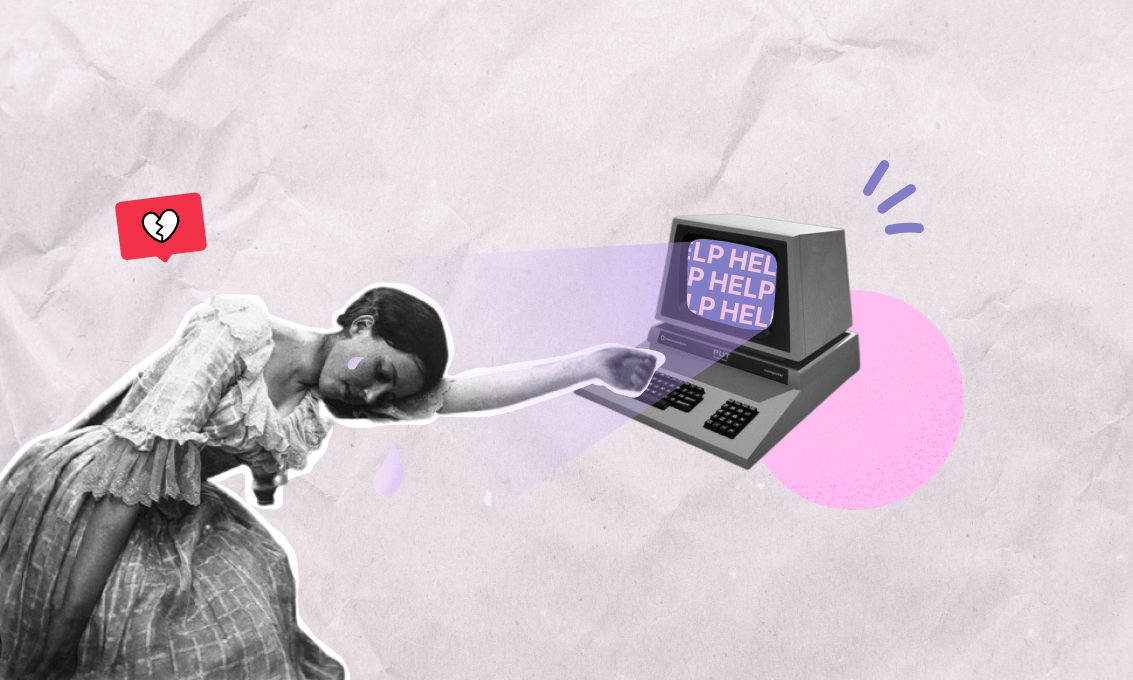 Pattern recognition technologies also make it possible to decode the meaning of conversations on the platform to detect profanity and block rude users. They can also detect posts that may indicate suicidal thoughts.

Today, robots are increasingly used in hazardous areas, for example, for the detection of radioactive material. This is done with the help of pattern recognition.

To perform its task, a robot needs “senses”: touch, sight, and hearing. This is where pattern recognition comes into play. A camera captures the image patterns to be categorized, a feature extraction mechanism discovers discriminative features from the images, and a classification algorithm evaluates the image patterns to set it to dangerous or non dangerous based on the collected figures.

Since humans are not directly involved, companies do not put their employees at risk. Not only does the use of the robots protect people’s lives, but it also allows enterprises to reduce the size of their workforces and associated expenses, such as vacation entitlements and health insurance costs, which is particularly important for manufacturing, construction, and other high-risk industries.

Pattern recognition is used to identify words and sentences in a block of text. This is used in grammar checkers and machine translation.

In business, text processing is essential for improving customer service. There are a number of tools for extracting insightful information from customer feedback and product reviews. They allow you to categorize text based on the topic, the keywords used, and the sentiment and intent expressed. Besides, text processing is extremely important for competitor and market analysis, since it lets you automatically extract names of companies and people, brand mentions, geographic locations, and other types of relevant information from data for marketing and business development purposes.

Optical character recognition is a process of converting scanned images of text and camera photos, screenshots, etc., into editable electronic documents. One of the benefits of optical character recognition is that data no longer has to be entered by hand, which saves time, eliminates the need for routine operations, and increases efficiency. OCR systems use a mix of hardware and software. PDF document editors, and digital libraries are some examples of programs that have image recognition as their main feature. Some more cases of pattern recognition applications

It is used to recognize spoken words as well as other sounds like music or bird calls. Pattern recognition is used in voice-activated devices such as hands-free phones, car navigation systems. Among the most useful applications of speech recognition techniques are text-to-voice and voice-to-text apps, which allow people with visual impairments to hear written text. So do voice assistants, which provide around-the-clock support to millions of website and mobile app users.

Fingerprints are analyzed using pattern recognition software that compares them with other fingerprints on file for identity verification purposes such as border crossing or immigration control.

Machine learning-assisted identification has given security and surveillance systems a significant boost. They can now monitor multiple video transmissions in real time and detect intruders, for example. The same technology is used for face ID systems in business centers and production facilities. 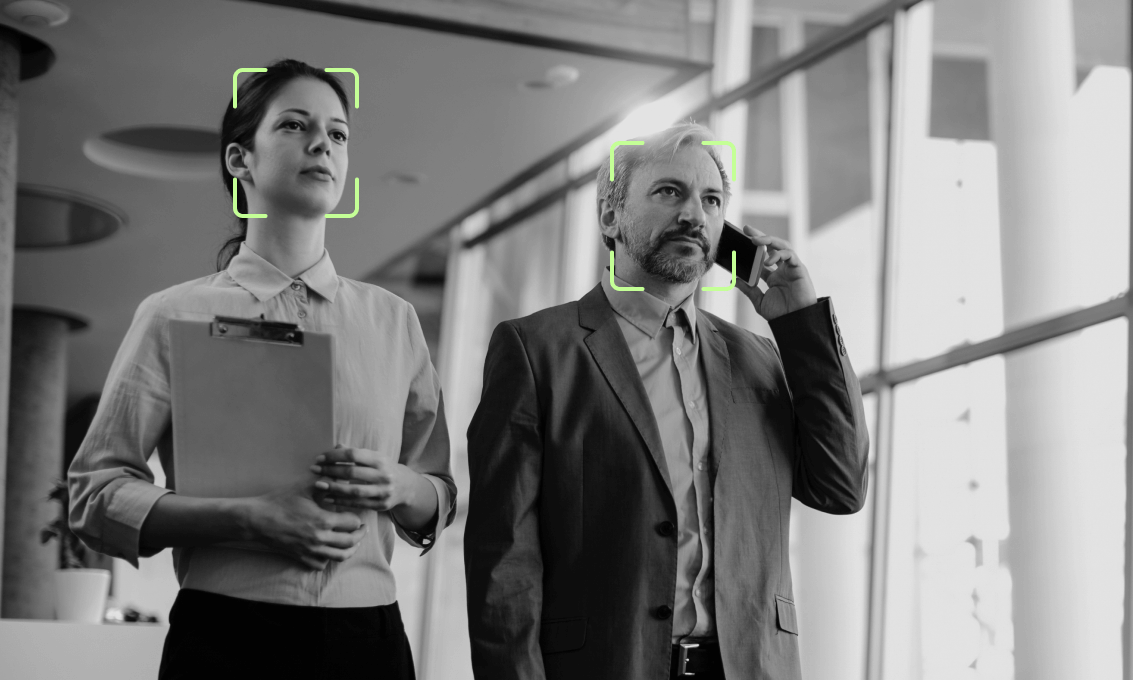 ML-based pattern recognition is employed to recognize human emotions in photographs or video footage. Deep learning is used to detect certain patterns in people’s facial expressions and movements. These insights are used to improve marketing strategies and customer service.

The problem of determining the future value of corporate stocks or other traded assets using pattern recognition is a classic but difficult task. Deep learning models have only recently been introduced and are rapidly gaining ground.

Pattern recognition is often used to find errors in code, and it is expected to become more widely used. Let’s take a look at some examples.

GitHub Copilot is an AI-driven tool that transforms natural language into coding recommendations. It was designed by GitHub and OpenAI and supports such programming languages as JavaScript, TypeScript, Python, Go, and Ruby. Billions of lines of code from public sources were used to train Copilot. Its coding suggestions include not only code itself but also entire unit tests and algorithms.

Tabnine is another AI-assisted tool for programmers. It is powered by AI models trained on specific programming languages. These models provide suggestions for each keystroke as well as recommendations for entire lines or functions in integrated development environments such as VSCode, Android Studio, IntelliJ, Eclipse, and Webstorm.

Clever-Commit is a parser developed by Mozilla in collaboration with Ubisoft. It is based on the CLEVER (Combining Levels of Bug Prevention and Resolution Techniques) study. Since CLEVER relies on code comparison, it not only points out incorrect code, but also makes suggestions for possible changes. In 60-70% of cases, Clever-Commit finds problem areas and just as often suggests the right edits for them.

SapFix is an automated editing tool. It receives information from Sapienz, a test automation tool, and Infer’s static analyzer, and selects one of several fix strategies based on Infer’s most recent changes and messages.

In some cases, SapFix reverts all or part of the changes. In other cases, it attempts to resolve the problem by generating a patch based on known patterns. If such a template does not fix the error, SapFix tries to adapt the template to the situation by making small changes to the abstract syntax tree.

SapFix collects several solutions, which are selected based on three questions:

After the changes have been fully tested, the patches are sent to the programmer for review, who then decides which change best solves the problem.

One example of successful pattern recognition in this area is CompanionPro. The device uses TensorFlowLite – Google’s neural network framework – to teach dogs a range of typical commands such as “sit”, “stay”, “down”, etc.

How does it work? The process is roughly the same as with a human trainer. When teaching a particular command, such as “sit,” the device first gives it unconditional treats. This is initially done in the presence of the human supervisor. Once the animal is used to the device, the person leaves it alone with the device so the dog can interact with it freely.

During training, CompanionPro constantly checks to see if the dog is ready to work and detects signs that it is comfortable and wants to participate. The device then waits until the dog sits down and instantly rewards it. Next, the device introduces the “sit” command and rewards the animal each time it reacts to it correctly.

CompanionPro has been tested in a number of shelters. By encouraging animal skills, it helps increase adoption rates. For home animals, the device has proven effective in reducing the anxiety and stress caused by separation from their guardians.

Pattern recognition – analyzing incoming data and identifying recurring patterns in it – is a tool that can be used in almost any industry. It works with all types of data, such as text, images, and video. Its applications range from medicine to manufacturing and from ecommerce to robotics and computer vision.

Introducing this AI technology into the daily operations of businesses, research institutions, and government agencies can help significantly increase effectiveness, save lives, and achieve scientific breakthroughs.

39 upvotes
Get new articles via email
No spam – you'll only receive stuff we’d like to read ourselves.
What Are the Real-World Applications of Pattern Recognition?
More from Serokell 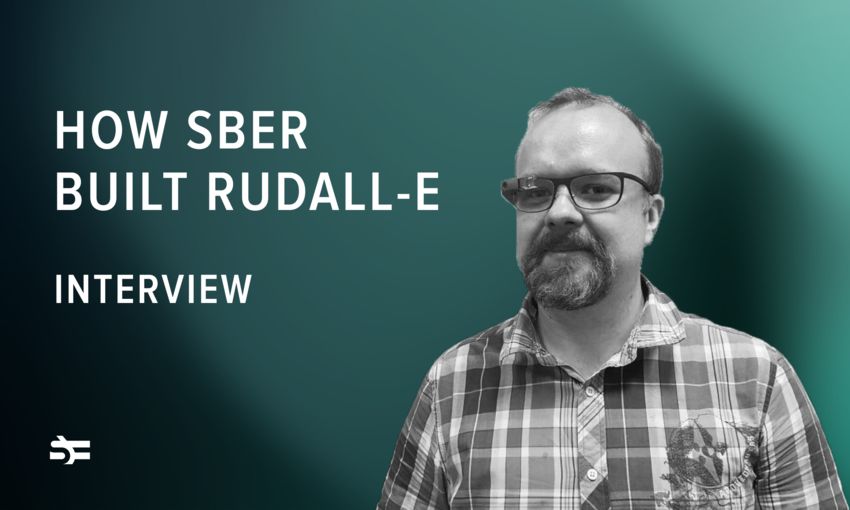 How Sber Built ruDALL-E: Interview with Sergei Markov
What does it take to build a model with 12 billion parameters? Why is open-source culture important in machine learning research? Find out the answers to these questions in our interview with Sergei Markov, the chief of the SberDevices experimental machine learning systems department.
8 min read 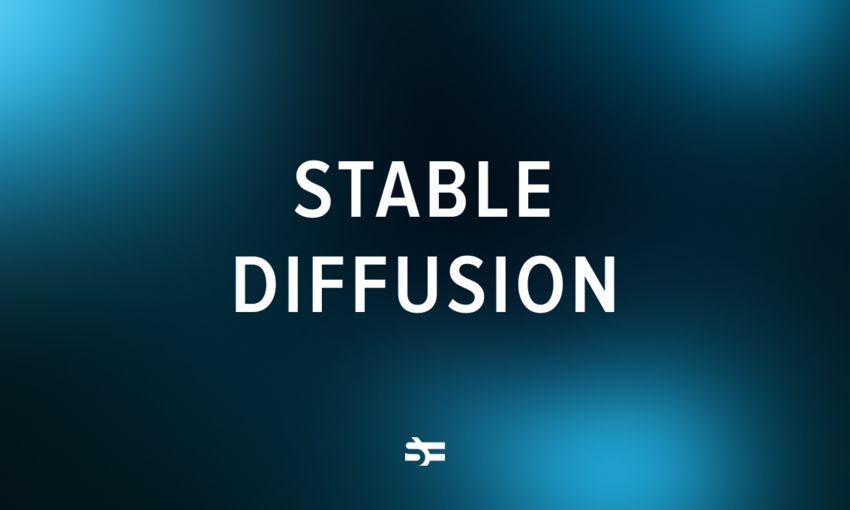 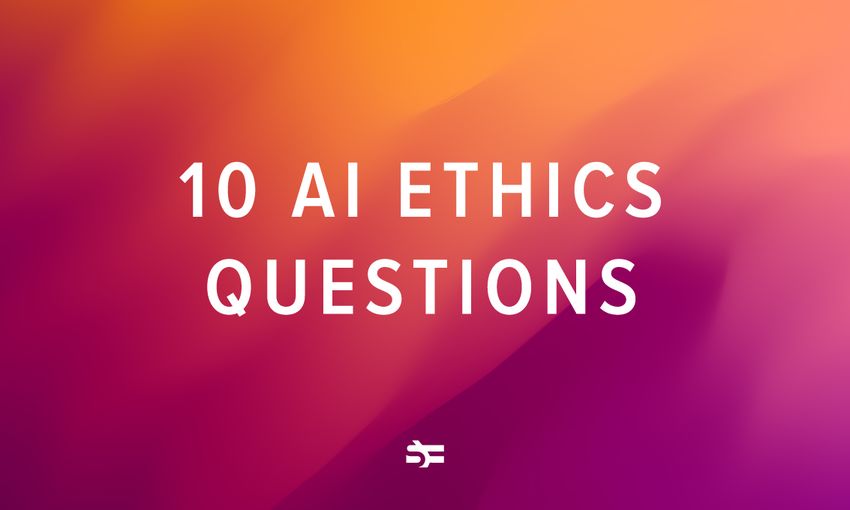