Get Started with Rust: Structs

In almost any programming language, you can create data structures – like classes or records – that pack a group of things together. Rust is no exception to this with structs.

This article will show you how to use structs in Rust.

By the end of this article, you’ll know:

All the code from this post is available here.

What is a struct in Rust?

In Rust, a struct is a custom data type that holds multiple related values.

Let’s jump straight into our first example and define Point – a wrapper for two coordinates.

You can use a tuple struct to group multiple values together without naming them.

How to create an instance of a struct?

Here are the structs that we defined previously.

We can now create instances of these structs – objects of type Point and PointTuple.

As you can see, the initialization syntax is pretty straightforward. It’s like defining a JSON object where keys are replaced by field names.

Two things to keep in mind:

You can get the value of a field by querying it via dot notation.

One may wonder: what’s the syntax to get the value of a specific field of a tuple struct? Fortunately, Rust has chosen the simplest way possible, by indexing tuple components starting from zero.

It’s possible to change the value of a field using dot notation, but the struct variable must be defined as mutable.

Unlike some other languages, Rust doesn’t allow to mark a specific field of a struct as mutable or immutable.

To illustrate them, we first need to define a new struct and create an instance of it using the usual syntax.

It often happens that you want to copy an instance of a struct and modify some (but not all) of its values. Imagine that a different bicycle brand manufactures a model with identical parameters, and we need to create an instance of that model.

We can move all values manually:

But this method involves too much code. Struct update syntax can help:

..b1 tells Rust that we want to move the remaining b2’s fields from b1.

You can omit the field name in field: value initialization syntax if the value is a variable (or function argument) with a name that matches the field.

Okay, let’s try to do something with our struct. For example, print it.

Suddenly, the compiler says "Point" doesn't implement "std::fmt::Display" and suggests that we use {:?} instead of {}.

But we also get a helpful note:

The reason for this error is that both Debug and std::fmt::Display are traits. And we need to implement them for Point to print out the struct.

What is a trait?

A trait is similar to an interface in Java or a typeclass in Haskell. It defines certain functionality that we might expect from a given type.

Usually, traits declare a list of methods that can be called on the types that implement this trait.

Here’s a list of commonly-used traits from the standard library:

In our example, Point needs an implementation of the Debug trait because it’s required by the println!() macro.

There are two ways to implement a trait.

Let’s start with the first option. We need to add #[derive] before the definition of Point and list the traits we want to derive.

Now the compiler doesn’t complain, so let’s run our program.

We didn’t write anything related to formatting Point ourselves, but we already have a decent-looking output. Neat!

You may have noticed that we also derived the Eq and PartialEq traits.

Because of that, we can compare two Points for equality:

Trait deriving has its disadvantages.

That’s why it’s possible to implement a trait by yourself.

When we tried to print a Point instance using "{}", the compiler said that Point doesn’t implement std::fmt::Display. This trait is similar to std::fmt::Debug but it has a few differences:

You can think of the Debug and the Display as the formatters for programmers and users, respectively.

Let’s add a manual implementation of Display. In the brackets, we have to define every function that is declared in the trait. In our case, there is only one — fmt.

Now we can print our Point struct both for developers and users.

Just like in Java or C++, you can define methods that are associated with a particular type. This is done in an impl block.

You can call these methods via dot notation.

Methods can mutate the struct instance they are associated with, but this requires &mut self as the first argument. This way, they can be called only via mutable binding.

You may have noticed that methods have self as their first argument. It represents the instance of the struct the method is being called on, similar to how it’s done in Python. Some syntax sugar is involved here. Let’s desugar it in two steps.

Don’t confuse self with Self. The latter is an alias for the type of the impl block. In our case, it’s Point.

You can also use the impl block to define functions that don’t take an instance of Self, like static functions in Java. They are commonly used for constructing new instances of the type.

You can call these functions by using a double semicolon (::):

Why use methods instead of regular functions?

Methods are quite useful for making your code better. Let’s look at some examples.

To call methods of a type, we use dot notation.

Besides beautiful syntax, dot notation provides an additional property — autoreferencing — which means you can write point.shift_right(3); instead of (&mut point).shift_right(3);.

Functions don’t have this advantage, you always have to reference:

All methods are placed inside one or multiple impl blocks. This implies two things.

First, you don’t have to import methods.

Second, methods are namespaced: you don’t have name collisions across types.

Without methods, you would need to write something like this:

Methods and traits are somewhat similar, so beginners can mix them up.

The general rule for when to use which is simple for beginners:

A method can be invoked only on the type it is defined for. Traits, on the other hand, overcome this limitation, as they are usually meant to be implemented by multiple different types.

So traits allow certain functions to be generalized. These functions don’t take just one type, but a set of types that is constrained by a trait.

We have already seen such examples:

In this article, we covered the basics of structs in Rust. We explored the ways of defining, initializing, and adding implementation blocks to both structs and tuple structs. We also looked at traits and how to derive or implement them.

Structs are not the only way to create custom types. Rust also has enums. While we did not cover them in this blog post, concepts as methods, traits, and deriving can be applied to them in a similar way.

34 upvotes
Get new articles via email
No spam – you'll only receive stuff we’d like to read ourselves.
Get Started with Rust: Structs
More from Serokell 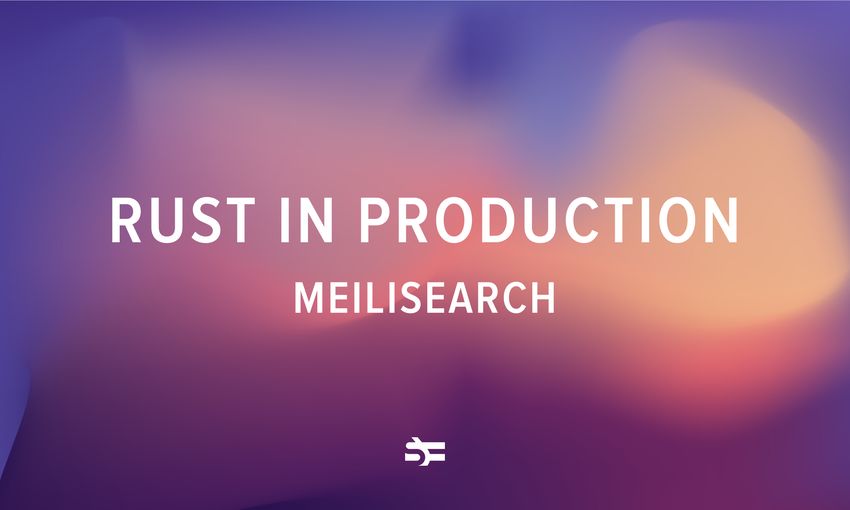 Rust in Production: MeiliSearch
Read our interview with Thomas Payet, the co-founder and COO of MeiliSearch, to learn about their experience with Rust and discover tips for starting your own open-source project.
5 min read